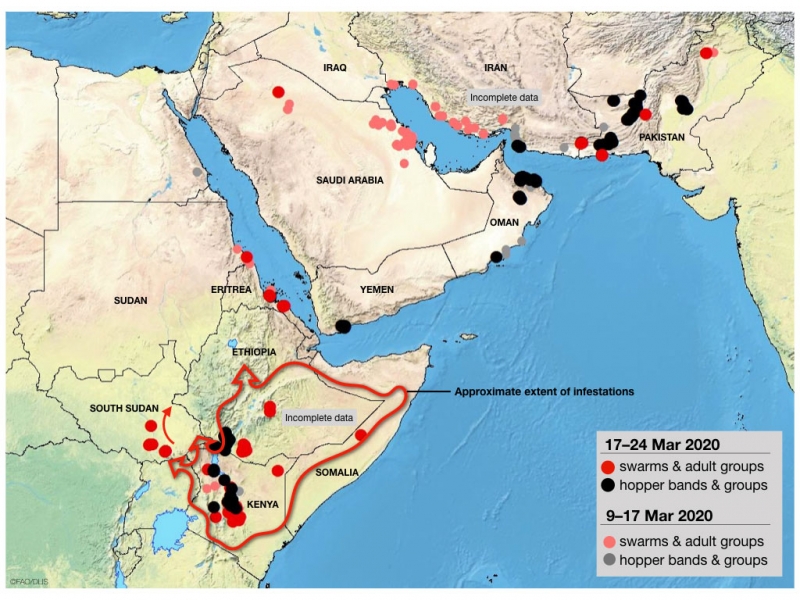 The situation remains extremely alarming in the Horn of Africa, specifically Kenya, Ethiopia and Somalia where widespread breeding is in progress and new swarms are starting to form, representing an unprecedented threat to food security and livelihoods at the beginning of the upcoming cropping season.

KENYA. Hopper bands continue to develop and form an increasing number of first-generation immature swarms in northern and central counties. The swarms are maturing are will be ready to lay eggs from the first week of April onwards. Further concentration expected in Marsabit and Turkana. Aerial and ground control operations continue.

ETHIOPIA. Hopper bands are present in Oromiya and SNNPR regions, including the Rift Valley. A new generation of immature swarms are forming and maturing. Aerial and ground control operations continue.

SOUTH SUDAN. Several mature swarms from the south appeared in the southeast near Torit on 18-19 March; at least one moved to Juba on the 21st, continuing to Bor on the 23rd and flew towards southwest Ethiopia.

The situation is under control in the following countries:

SUDAN. Vegetation drying out on the Red Sea coast and locusts declining with only scattered adults present on south coast.

ERITREA. Control operations continue against groups of late instar hoppers and immature adults on the Buri Peninsula and on southern coast near Tio. Vegetation drying out on central and northern coast.

IRAQ. There were reports of control operations in the southeast. More details are awaited.