Over 1.8 million in Central Africa are severely food insecure

Over 1.8 million in Central Africa are severely food insecure 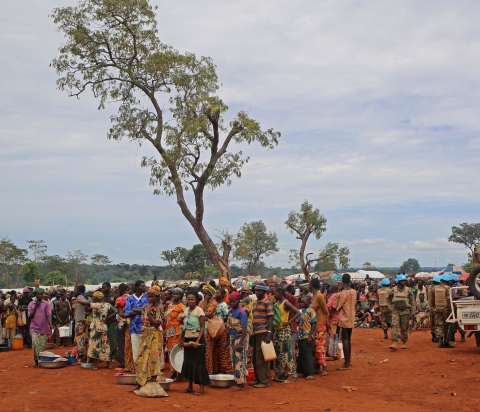 For populations in Phase 3 (Crisis) and Phase 4 (Emergency), emergency food and humanitarian assistance should be continued to support populations during the lean season. Protective measures in areas of high concentration of displaced persons should be put in place, to enable households to access rural areas for the preparation of the harvest season and to access hunting and gathering products.
Support interventions for returnees should be continued in areas where there is a continuation of the Khartoum agreements that would reduce insecurity in the various areas that is causing displacement. This will encourage the return of displaced people to their areas of origin but especially the access of the people to the fields in the areas where this is not currently possible.
Humanitarian and livelihood measures for the host population should be implemented, with displaced people having access to the fields as well as returning them to their areas of origin to facilitate their recapitalization (agricultural kits, small livestock, cash transfers, income-generating activities).
Production should be improved by strengthening the agricultural techniques of the populations. Crop diseases (market gardening and food crops) should be prevented and quality seeds provided  in a timely manner respecting the schedule for all populations.
The sanitary conditions of households should be improved through the development of drinking water sources, and the rehabilitation and construction of boreholes in areas where access is very limited. In terms of hygiene and sanitation, households should be educated on the construction and use of improved latrines.
For areas with high global acute malnutrition (GAM) rates, actions to prevent acute malnutrition in all its forms for children from 0-59 months should be strengthened. An integrated approach to the management of acute malnutrition, health, water, hygiene, sanitation in areas with a very high prevalence, especially in areas of high concentration of displaced persons, should be adopted. The use of mobile clinics should be strengthened to expand coverage of access to health services.
Socio-economic infrastructure such as roads should be improved, to facilitate transactions between areas and therefore access to markets by the people.
Processing and conservation of products (market garden products, non-timber forest products, livestock and fisheries products) should be promoted, to increase availability during the lean season.