Widespread rains that fell in late March are expected to cause a dramatic increase in locust numbers in East Africa, eastern Yemen and southern Iran in the coming months.

EAST AFRICA
The current situation in East Africa remains extremely alarming as more swarms form and mature in northern and central Kenya, southern Ethiopia and probably in Somalia. This represents an unprecedented threat to food security and livelihoods because it coincides with the beginning of the long rains and the planting season. Although ground and aerial control operations are in progress, widespread rains that fell in late March will allow the new swarms to mostly stay in place, mature and lay eggs while a few swarms could move from Kenya to Uganda, South Sudan and Ethiopia. During May, the eggs will hatch into hopper bands that will form new swarms in late June and July, which coincides with the start of the harvest.
● KENYA. More swarms are maturing and increasing in size in central and northern areas with some moving westwards; egg-laying is imminent.
● ETHIOPIA. Hopper bands and an increasing number of swarms are maturing in the south (SNNPR, Oromia); new swarms appeared in northern and southern Somali region.
● SOUTH SUDAN. A maturing swarm arrived in Magwi County on 8 April from Uganda.

ARABIAN PENINSULA
The situation in Yemen continues is likely to be deteriorating but no new information has been received.
● SAUDI ARABIA. Control continues against early and mid-instar bands near the Persian Gulf.
● OMAN. Late instar hopper groups, bands and a few small swarms seen laying eggs near UAE; control underway.

SOUTHWEST ASIA
Spring breeding is underway. The situation in Iran continues to be serious and worrisome.
● IRAN. An increasing number of hopper bands continue to form along the southern coast; a few swarms near Jask.
● PAKISTAN. Control continues against hopper groups in Baluchistan, Punjab, and near the Indian border; more adult groups forming in Baluchistan. 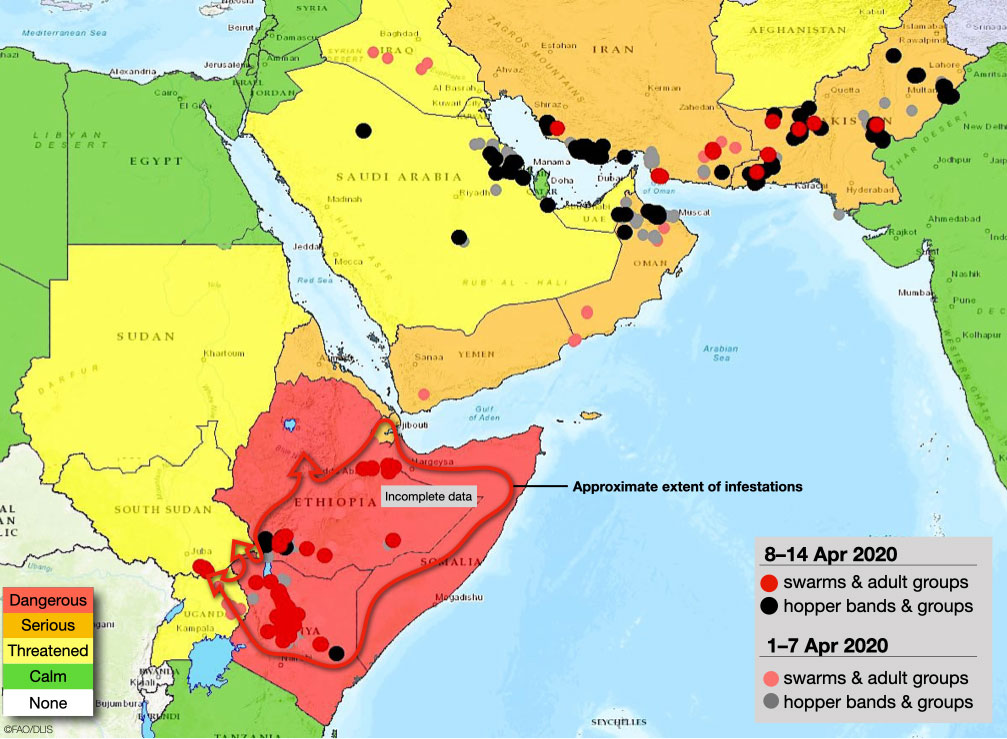