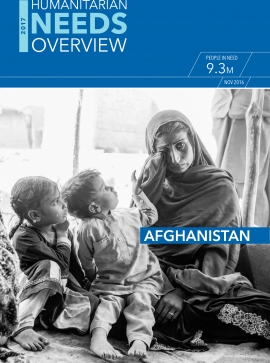 Afghanistan remains one of the most dangerous, and most violent, crisis ridden countries in the world. The continued deepening and geographic spread of the conflict has prompted a 13% increase in the number of people in need of humanitarian assistance in 2017, now 9.3 million. Violations of International Humanitarian Law (IHL) and Human Rights Law (HRL) occur regularly - including, targeted killings, forced recruitment and attacks on health and education facilities. The 8,397 civilian casualties in the first nine months of 2016 is the highest recorded, and included a 15% increase in child casualties compared to 2015. In 2016 increasingly frequent ground engagements continued to be the main cause of civilian casualties, while also limiting freedom of movement for civilians and contaminating areas with explosive remnants of war (ERW) which disproportionally affect children.6 Health partners reported 57,346 weapon wounded cases between January and September alone, compared to 19,749 in 2011, representing almost a three-fold increase.

The country is facing increasing numbers of people on the move. In 2016 the conflict has led to unprecedented levels of displacement, reaching half a million in November - the highest number recorded to date. 56% of the displaced are children and face particular risk of abuse, and exploitation, as well as interrupted school attendance and harmful child labour. Multiple forms of GBV, particularly early and forced marriage, domestic, psychological, and sexual abuse are reported, affecting individuals in hosting and displaced communities alike. Further, a lack, or loss of civil documentation, with difficulties in obtaining documents outside of the province of origin, regularly results in hindered access to services for considerable numbers of affected individuals.

Recent estimates suggest over 9 million people have limited or no access to essential health services. Rates of infant and maternal mortality remain among the highest in the world at 73/1000 live births and 327/100,000 live births respectively17 with reports of maternal mortality ratio (MMR) rates as high as 417/100,00018 in rural parts of the country. Severe food insecurity is on the rise with 1.6 million people severely food insecure.19 2016 nutrition surveys show global acute malnutrition (GAM) prevalence ranging from 10.9 to 20.7%. Severe acute malnutrition (SAM) has breached emergency thresholds in 20 of 34 provinces. 1.8 million people require treatment for acute malnutrition, of which 1.3 million are children under five.

Magnifying this crisis of forced displacement, 2016 saw the unprecedented return of some 600,000 registered refugees and undocumented Afghans from Pakistan. For the majority, return is triggered by shrinking asylum space and community acceptance, and the experience often abrupt and distressing. After more than 30 years living in Pakistan, many have arrived into an unfamiliar country with few possessions, assets or social support networks.